The Most Cost Effective Solution to Standing Water on Flat Roofs: The Roof Sentinel Solar Roof Pump Is The Answer!

Why the Roof Sentinel?

COMPLETELY engineered using the latest Smart Chip technology, built from high-tech materials and structured to withstand the elements, the Roof Sentinel is the perfect choice. This solar roof pump does the job of removing ponding water and protecting flat roof structures 24/365!

We will ship within 24 hours.

“If you want a cost effective solution to ponding water on flat roofs, not just a bunch of hype and crap that doesn’t work, YOU need to order The Roof Sentinel” - The Texas Roof Medic

Nicholas Bryditzki, The Texas Roof Medic, is a licensed roofing contractor, certified infrared thermographer and roof restoration expert. Along with his business partner and bride Janet, he helped developed the Roof Sentinel. Nick and Janet are originally from Arizona, where they operated a successful roof restoration contracting business. In 2012 they sold the business and semi-retired in the Great State of Texas. While he was not the original inventor, Nick is the innovator. He invested thousands of hours, tens of thousands of dollars (and lots of sweat and frustration) to develop this dependable and attractive solar roof pump. “We hired one of the premiere solar engineers in the United States and said, “I want a bullet proof solar roof pump. It has to be dependable so my roofer brothers (and sisters) can sell it to their customers with confidence. It must also be easy for facilities managers to install and I want to have it patented!” And that is exactly what happened! The Sentinel Solar Roof Pump was created! 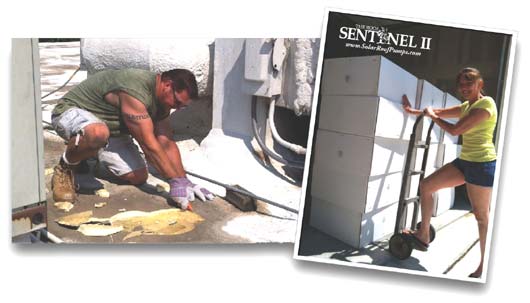 Most Flat Roofs Have Some Sort of Ponding Issues

As long as there have been flat roofs there has been the problem of ponding water. Many engineers, roofers, contractors and other innovators have tried to develop cost effective solutions for ponding or standing water on flat roofs. Auxiliary drain systems have most likely been around since ponding water caused the first flat roofs to leak. Many other potential solutions have come and gone – all with their own issues. One of the biggest challenges with ponding pumps for flat roofs is the use of electricity. Water and electricity NEVER mix. Later generations of ponding pumps added solar, and several different types of patents are on record for solar powered roof pumps. One of the primary issues has been dependability. Sometimes when engineers get involved, ponding pumps can become over complicated, over thought and overly expensive. Then get a roofer involved and it ends up bailing wire, duct tape and a plastic box. The Roof Sentinel Solar Roof Pump was developed with the highest of standards for a long-lasting, cost-effective solution to flat-roof water ponding.

While the Solar Roof Pump idea has been around for decades, some of the original patents go back to the 1970’s. From complicated and extravagant systems to small tinker toy like units and plastic battery boxes, ponding pumps are attempts to fill a need for a cost effective solution to ponding water on flat roofs. NOW, for the first time in history, with a unique design and technology the Sentinel II Solar Roof Pump was developed with smart chip technology. It is incased in aircraft grade spun aluminum with a proprietary, high-efficiency solar panel. It currently comes in two models, The Sentinel XD with a remote solar panel and the Sentinel LP - a low profile solar roof pump that has the proprietary solar panel embedded in the face.

Coming soon is the Sentinel Remote Alert System™ that will alert the facility or maintenance managers that the pump has kicked on and water is ponding on their roof.